Why Does Mommy Drink? Caillou, That Whiny Bitch 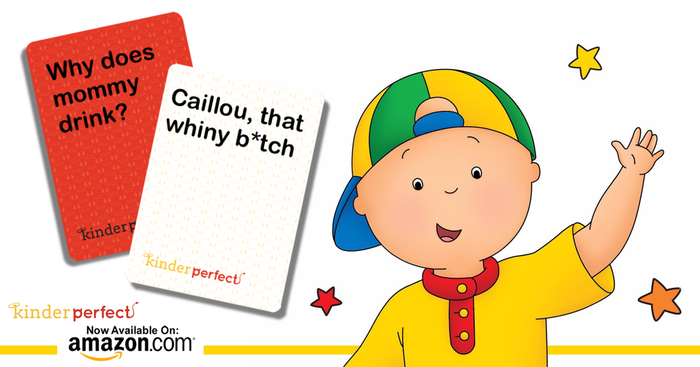 Parents hate Caillou. That’s the overwhelming message from the 700 millennial parents who submitted almost 8,000 card ideas to create KinderPerfect, the new card game for parents that’s like Cards Against Humanity.

When we asked parents for card ideas when we launched KinderPerfect, we expected they would suggest cards about poop and puke, the twin shocks for new parents. We did get card ideas like, “a poop mural” and “projectile vomiting,” but we also got a whole slew of cards hating on Caillou.

Parents have a deep hatred of Caillou, the animated television series about an inquisitive four year of the same name. We never imagined that a cartoon toddler would create such animosity. As Americans, we had never seen the show, and didn’t know much about the bald Canadian child.

Then we watched a show in the name of market research.

Caillou is a Whiny Bitch 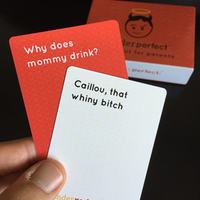 Wow! Once you watch the show, you’ll realize why parents hate the show so much. It starts with the annoying theme song that introduces Caillou’s whiny voice, which then never shuts up. He has a sister named Rosie, a cat named Gilbert, and two parents without any noticeable personality traits, besides letting Caillou act in ways you’d never want your kid to act.

He whines non-stop, orders people around, foolishly hurts himself, throws senseless tantrums, and causes endless trouble, then shares his self-centered views about all these activities, while his mother stands idly by or even encourages him. All the signs he’s THAT family.

And why is he bald? Caillou is purported to mean “pebble” or “bald head” in French, and the show creators apparently made him bald as a way to represent all children, but how many bald toddlers do you know? There are whole Internet memes trying to explain why he is bald.

Oh, and its pronounced Cai-yoo, just to be extra annoying.

Caillou is Why Mommy Drinks 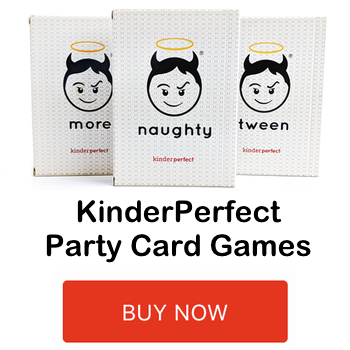 Usually, we can watch our children’s shows and find some fun in them. Not so with Caillou. Do not watch that show sober. You need at least one glass of wine before that theme song starts. Why? Here are a few reasons why Caillou makes mommy drink:

Canada usually obsesses about having a positive international reputation for love and neutrality. Yet Canadians are surprisingly tolerant of a bald toddler creating new foreign enemies every day.

Caillou is produced in Canada and was inspired by a popular Quebec children’s book series. The television program started in Canada, but is now shown on PBS in the USA too. Of course this has promted many parents to petition PBS to stop showing the children’s program, and rightly so.

But why does Canada continue to export Caillou? Could it be that Caillou is an accurate portrayal of Canadian parenting? Could Canadian parents be raising a generation of whiny bitches? Can this be the outcome of a tolerant marijuana policy? Too much maple syrup and whiskey? Probably…

Get this year’s must-have game for parents with FREE Shipping to USA and USPS shipping globally.

Help us make hilarious expansion packs. Submit your question and answer card ideas, and if we use them, we'll send you a free game!